On The Eve of August... Now Is When Tarpon Fishing Is Best! 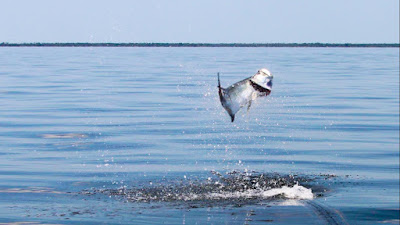 Tarpon begin their migration to the shoreline in March as part of their reproduction cycle.

Then and through April, the fish are feeding to gain body weight and oil for the rigors of spawning. In May and continuing through July, they begin their spawning cycles.

While this may be the most popular time to fish tarpon, it is not necessarily the best time. The fish 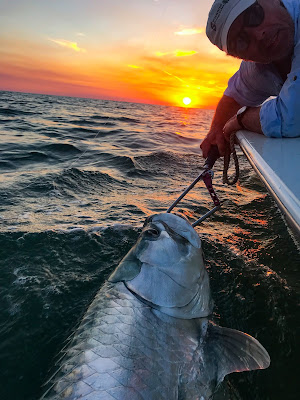 scatter out and feed heavily at night. About an hour before sunrise, the fish begin to "collect" each other and school up tight. They begin courtship behavior and their willingness to feed becomes preoccupied.


The tarpon will "snack" while engaged in this behavior. Actively feed? Not too often.
The spring paints a pretty backdrop setting for fishing. Often the water is a clear emerald green. The schools are plentiful and the numbers in the schools are staggering.

This was a great setup decades ago when the sport was not overexposed. Today-there is nowhere that the spring tarpon swim that they are not being pressured.

Tarpon only do 4 things:
The tarpon has no idea that the angler merely wants to play the fish with a rod and reel. For them, the game of angling is a threat to their lives and it is. Additionally, if the daylight schools are disturbed in their courtship, they change direction and keep their mouths closed. 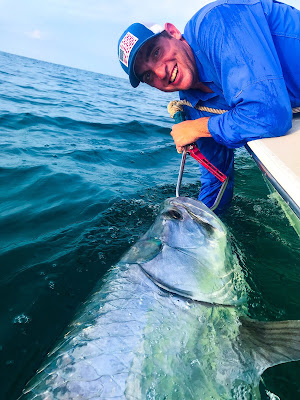 Today the fish are plentiful and are big. Conservation is and has been working very well since 1988. Somewhere in the mid 90s the tarpon was exposed to the world in every media imaginable. Every year -more and more are catching "Tarpon Fever".

As the number of boats increase, the tarpon changes its habits to avoid them, including migratory patterns, travel routes and feeding patterns. These changes make catching them very challenging for those who are not willing and/or skilled to change their plan of attack. For the salty tarpon fishermen, improvising, adapting and overcoming is something in their blood. They get around this issue-at least for now.


By the end of July the tarpon has concluded their reproduction cycle. Some fish will move north to the Delta where the Mississippi River flows into the Gulf of Mexico.  Some will remain in the passes and others will "break-off" and enter large bays, harbors and estuaries.

Reproduction cycles of fish and game are often uncompromising. In the case of the tarpon- they have swam hundreds of miles cycling between the passes and the edges of the Continental Shelf. They lose an inconceivable amount of body fat and oils necessary to sustain life and must find a food source that is abundant to replenish and rejuvenate. 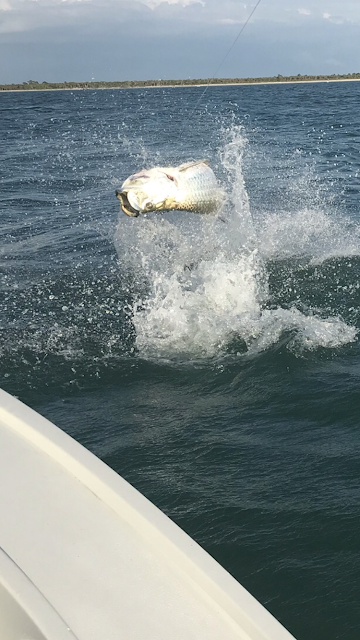 Initially as the fish move inside to the backwaters. Loose lips spread the word quickly. There is something about one's need to attach themselves to the tarpon and which has existed since the Victorian Era when the fish where first being landed on rod and reel.

As post spawn tarpon start to gorge-they are obvious and easy targets. This phase does not necessarily last long. The tarpon begin to break up in order to compete with each other for forage. The water temperature continues to rise, resulting in the fish being less active in "rolling" on the surface. “Working” for them has an aftereffect- this is when the "fleet" cuts out until next year.

Within our area there are just a handful of post spawn tarpon. Decade after decade, year after year and day after day it is the same faces and boats that capitalize on non-pressured and hungry GiantTarpon.

Our time is now--August, September, October and into November. Getcha some!

Note: Our website was the very first Florida charter fishing on the Internet in 1996. For 23 years-we've kept the layout unchanged. We think the age of anything in the fishing business is a very important factor to consider when choosing a charter. Today the sites are more like a telephone book listing and all sites claim and appear the same.

Formatting the "Fish'n Report" on our original site was tedious. We moved to "micro blogging" on "social media". That works for some but not all. Next we moved to this blog format with Goggle. It seems difficult for the company to "index" their "Blogger". why do it if it can't be found? 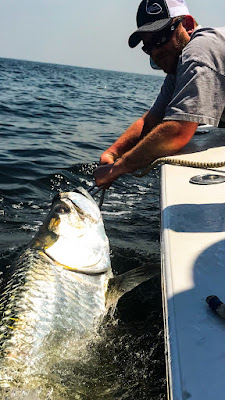 When the predominant becomes the inconsequential, change must come. I love to write and I have been doing that consistently for decades until one day--the pieces became difficult to find. Too often that fact takes the wind out of the sails for many scribes. Over the last 10 months I have been researching on how to make changes yet keep our long following and too, draw in new interest.  Last winter I started building a new model. Over the next few months-all will be in place.

Posted by GiantTarpon at 11:19 PM No comments: